New York magazine’s Jonathan Chait has taken issue with me and a few other liberals who argue that certain conservative and Republican elites have intentionally subverted recovery from the pandemic to undermine President Biden.

He argues instead that the right’s general bent on the virus “has not fundamentally changed since [Joe] Biden’s election” and asserts that assigning them malicious intent “flies in the face of nearly all the evidence we have.”

The former assertion rests on a huge historical coincidence that makes it difficult to falsify: namely that the government only authorized coronavirus vaccines in the immediate aftermath of the election, after it became clear that Donald Trump would no longer be president. The latter assertion is only true if you ignore copious evidence of sabotage.

Normally I’d let my short-form responses to his article stand on their own, but there’s more at stake in this disagreement than scorekeeping between columnists. If liberals don’t understand the contours of the right-wing elite’s value system they will be unable to anticipate conservative efforts to engineer Democratic governing failures, and their efforts to govern successfully despite that opposition will falter.

Chait’s argument rests on the very real continuity between Republican hostility to pandemic mitigation efforts under both Trump and Biden. “If Republicans had a partisan motive then, it was the belief that opening up the economy and taking the hit to public health would help President Trump,” he writes. “It seems hard to understand how they would suddenly decide the same course of action would hurt President Biden.”

This reasoning elides three key points, which, taken together, make it perfectly easy to understand why Republicans might take a single course of action initially with the goal of helping Trump, then with the goal hurting Biden. First, and most obviously, GOP hostility to COVID-19 mitigation likely cost them the election—that is, their calculation that encouraging COVID-19 spread to avoid economically harmful mitigation measures would redound to the president’s political benefit was wrong. Second, Republicans didn’t have a position on vaccine promotion before this winter, because those vaccines were still undergoing clinical trials. Finally, the main difference between Trump and Biden on this score upends the Republican calculus under Trump: Biden takes the pandemic seriously and promised to crush the virus. 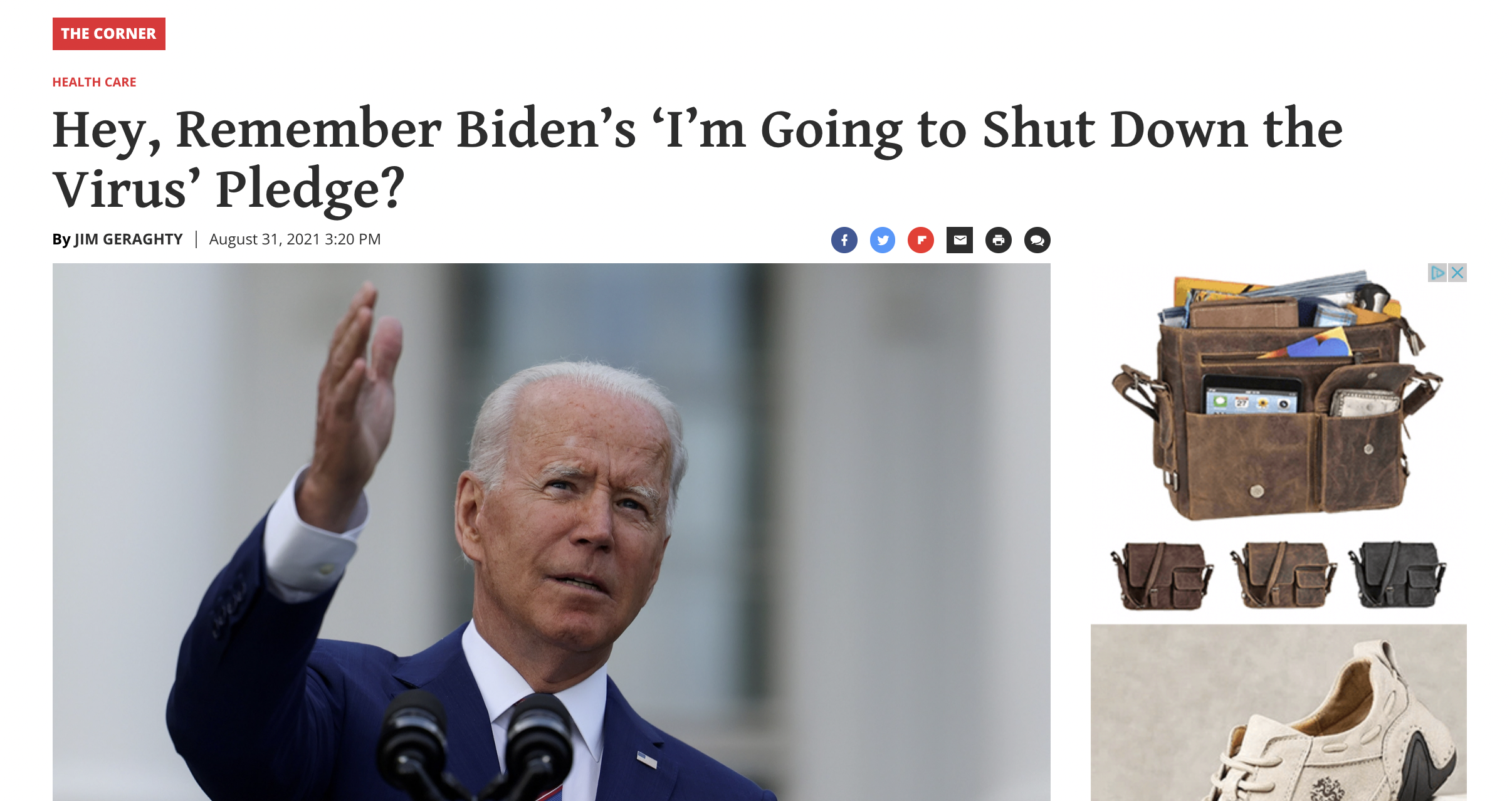 When you consider all of these confounding dynamics together, the appearance of GOP consistency around opposition to non-pharmaceutical interventions loses almost all of its significance.

To ascertain whether conservative leaders have encouraged COVID-19 spread to damage Biden’s presidency, you need to begin by asking whether their rhetorical and substantive bent on the vaccines would be different than it is if Trump had won. It’s in the nature of counterfactual analysis that nobody can answer that question with total certainty; but I think it strains credulity to imagine that so many prominent conservatives would have embraced anti-vaccine politics even if Trump had won.

It’s true that Republicans elites are divided over whether it’s wise to encourage coronavirus spread. Gov. Phil Scott (R-VT) has overseen a successful vaccine rollout; Senate Majority Leader Mitch McConnell has been adamantly pro-vaccine—even if he could be louder, and more critical of the anti-vax members in his conference. Because his ego is wrapped up in the apparent success of Operation Warp Speed, Trump himself—occasionally, tepidly—speaks up in favor of getting vaccinated, though he wields the vaccine rejection that his allies have fomented as a cudgel against Biden. “He’s not doing well at all. He’s way behind schedule, and people are refusing to take the Vaccine because they don’t trust his Administration.”

But the novel and highly contagious nature of this virus makes it such that the pro-COVID right doesn’t need unanimity to sabotage the pandemic response. They really just needed a couple cynical governors and influential media figures to mutually reinforce a combination of bad policies and dishonest messaging. When it became clear that Trump would no longer be president, Sen. Ron Jonson (R-WI) invited an anti-vaxxer to testify before the Senate homeland security committee, which he then chaired (and might chair today still had Republicans not gone on to lose the Georgia Senate runoffs). Would he have gone full anti-vax if Trump had been re-elected, and was promoting the vaccines as his pandemic-ending miracle? Would Republican governors be discouraging vaccine uptake? Would Fox News primetime be a nightly anti-vax infomercial?

I think the answer to all these questions is self-evidently “no,” and if it’s no, then they are indeed spreading COVID to harm the incumbent, and to great effect. This is why the news that Biden would miss his July vaccination target was an applause line at CPAC, and Ron DeSantis is mum on vaccines, but loudly promotes monoclonal antibody therapy, and then blames Biden for not “end[ing] covid.” It’s why Murdoch-owned media is pro-vaccine in the United Kingdom, where the government is conservative, but is the most destructive source of vaccine disinformation here in the U.S.

The cynicism of these actions has taken on different light as the circumstances since Biden won have evolved. First, it scanned as a group effort to undermine his vaccine rollout; then, when it seemed as if the rollout would nevertheless be successful enough to bring most of the U.S. to herd immunity, it looked more like an effort to free-ride off the grassroots energy of the anti-vaccine right. Finally, when the Delta variant began to feast on those communities, many Republicans briefly disclaimed all association with anti-vax politics, before reverting to form and enjoying the fruits of their efforts.

But nothing about this has been consistent with their position under Trump, because it all took shape after the election. It is simple, but incomplete, to note that many Republicans have been consistently opposed to masking and distancing since last year. It doesn’t complicate things much to fit their anti-mitigation views into a larger framework that includes their turn against the very vaccines that obviate more disruptive interventions.

Last year, Trump loyalists stigmatized mitigation because taking the pandemic seriously meant implying on some level that Trump had failed. The immense toll of that abdication has transcended the moral realm in our national discourse—from tragedy, to crime, to statistic. But to Republicans it also seemed temporary. After all, Trump’s potential re-election, combined with mass vaccination, pointed to a way out of their collective failure. Then Trump lost.

And so instead of embracing the vaccines as a crowning Trump achievement, they—not all of them, but many of them, and way more than enough—turned on vaccines, too. And they did so just as it became clear that Trump’s efforts to overturn the election would fail.

It’s important to come to terms with the fact that this happened, but also to understand why it happened, because as the conservative propaganda apparatus has swallowed more and more of the Republican Party, understanding how it operates has become the key to avoiding huge strategic errors.

To grasp that Republicans encouraged COVID spread to harm Biden, you don’t have to believe, in a conspiracy-addled way, that they convened in secret and built a playbook for maximizing infections. You simply need to observe that a critical mass of conservative elites view undercutting Biden and Democrats as a political lodestar, and make immensely consequential governing and broadcast decisions on that basis alone. They inhabit a political culture that embraces and even prizes bad faith as a means to acquiring power. I wrote about this value system, and what to do about it, before the election, and believe it remains the cardinal fact of American politics.

If you understood before the election that reflexive, oppositional demagoguery is the main weapon of Republican partisan warfare, you knew that while Democrats helped pass coronavirus relief during Trump’s presidency, Republicans would refuse to return the favor if Trump lost. Perhaps you implored Democrats to condition their votes for the CARES Act on the inclusion of automatic stabilizers, so that relief would be reciprocal across administrations, and outlays tied to empirical economic and public-health conditions. You also probably recognized that Democrats made a big mistake by not building automatic stabilizers into the American Rescue Plan when they controlled all political branches of government. And—to our point here—you also knew that Democrats should have embraced vaccination inducements, if not outright mandates, from the outset, because the idea that Republicans would subvert the goal of herd immunity under a Democratic administration didn’t strike you as ungenerous or unreasonable. It was just a straightforward application of their strategic worldview.

When you apply bad-faith strategic thinking—reflexive demagoguery—to the events of the day, you can anticipate all kinds of things that seem to shock the consciences of Democrats and liberals: That Republicans would claim to support a bipartisan investigative commission as an alternative to impeaching and convicting Trump for insurrection, and then, having acquitted him, that they would withdraw their support for any investigation at all. That having supported Trump’s ceasefire deal with the Taliban, they would wave the bloody shirt when Biden implemented it.

If you can engage in reflexive demagoguery as a thought experiment, you don’t see the point in harping on the obvious contradiction when Kevin McCarthy attacks Biden both for not getting all Americans out of Afghanistan quickly enough but also for not maintaining a permanent force at Bagram Air Base; you aren’t puzzled by the fact that Trump now claims to support re-invading Afghanistan; you know that they know these positions don’t meet any test of principle or consistency—and also that they don’t care. You just want other people to see what you see.

Had Democrats undertaken these kinds of thought experiments last November or December—or ideally years before that—and acted to neutralize the outputs preemptively, the country would be in better shape today, the filibuster would be gone, the democracy protected, and the party and economy on stronger footing ahead of next year’s midterms. That would’ve been the best time to reckon with GOP bad faith under Trump; the next best time is now.